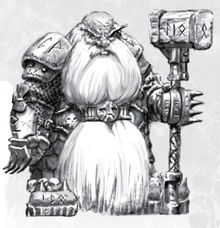 Runelords are the greatest of the Dwarf's Runesmiths.

A Runelord candidate may only be promoted with the death of an existing Runelord, so this position is highly coveted and contested. Among the Dwarfs, Runelords are equal to kings, and so they move through Dwarf society as some of its most esteemed members. A few Runelords withdraw from the world, sequestering themselves away to learn the deeper secrets of the Master Runes and perhaps create a few of their own, further diminishing their numbers as their names become legend.[1]

These elder masters do superlative work and are accorded the sort of reverence normally reserved for the Ancestor Gods. When a Runesmith judges the time is right, he chooses a young relative to be his apprentice and reticently teaches him, for an apprentice has to prove his worthiness to wring out even the most basic steps of the craft from his Master. Many powerful runes have been lost over time simply because a Runesmith could find no one he considered worthy enough to gain his innermost knowledge. Luckily, unless slain in battle, Runesmiths tend to live for a very long time, although they grow progressively more obstinate as they age. Currently, the most prolific of still-working Runelords is Thorek Ironbrow of Karak Azul, but the oldest living Runesmith is Kragg the Grim, Master Runelord of Karaz-a-Karak. Despite being a living link to a bygone era, Kragg has grown so stubborn as to be unbearable. [2]

The eight ancient Runelords before the War of Vengeance [5b]