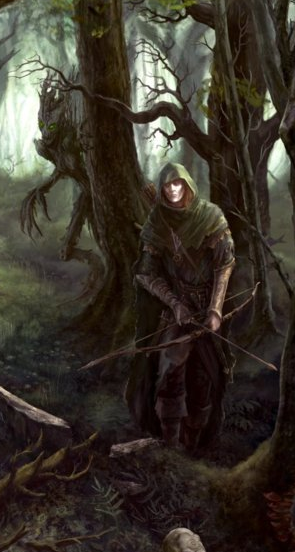 A Deepwood Scout patrolling the forest.

Deepwood Scouts hold the responsibility of patrolling those areas of the forest deemed too dangerous for Glade Guard to enter. To tread such paths, an Elf must be invisible not only to a predator’s sight, but to his other senses also - no easy matter when contending with otherworldly creatures to whom an Elf’s soul manifests as a brightly burning light.[1]

The Deepwood Scouts’ skills of stealth and concealment serve them well upon the battlefield. They are masters of ambush and distraction, the assassins of enemy artillery crews and of careless wizards who stray too far from the protection of their allies. Indeed, many an invading army has been brought to battle utterly unaware that kinbands of Deepwood Scouts have dogged its footsteps for days. Only when the battle lines clash do the Deepwood Scouts reveal themselves, sowing confusion and disruption amongst the enemy lines.[1]