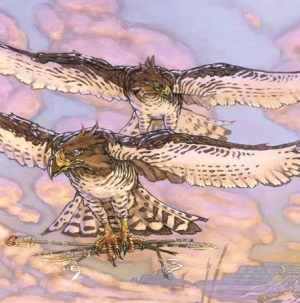 Great Eagles are the largest birds of prey in the Old World, with a wingspan that measures over thirty feet and having razor-sharp talons.

They are an ancient race that has dwelled in the mountains of the Old World since long before the coming of Man. [2a]

Their intelligence is greater than most creaures, only matched by the Dragons. [5a]

Most of them nest in the Grey Mountains, though a few live along the Worlds Edge Mountains range. Others can be found in the Annulii mountains of Ulthuan. [2a]

They are exceedingly intelligent and a few of their eldest are even rumoured to be capable of speaking in the tongues of other races, though they seem to prefer most often to deal with Elves, speaking with the Loremasters of that race, often warning them of creatures of Chaos descending from the mountains. [2a]

The vision of Great Eagles is so sharp that they can clearly watch the movements of ground animals from miles away. Correspondingly, they are capable of executing devastating ambushes wherein they attack an opponent from such a great height that their target isn’t aware of his danger till their claws sink into his flesh. The Great Eagles have long fascinated the scholars of the Empire for another reason: they seem to be immune to the taint of Chaos. All other natural creatures, when too long exposed to the warping effects of Chaos eventually mutate. Not so the Great Eagles.[1]

The Great Eagles of Ulthuan have always been firm allies to the Elves. The histories tell that the two races have fought in one another's cause since the time of the Daemon invasion, but legend carries the friendship deeper into the past. Indeed, in some tales, it was Talyn, King of the Eagles, who bore Ereth Khial away to the Underworld at Asuryan's command.

Like the High Elves, Great Eagles are haughty creatures who long remember insults, and do not suffer foolish company gladly. When High Elf armies assemble, the noble Eagles too join the battle. They swoop down upon the crew of enemy war machines, tearing them apart with powerful talons before using mighty wings to glide swiftly away.[4] They often give first warning of approaching Dark Elf vessels, and join the subsequent gathering of warriors in response. [5a]

Caradinor rode the eagle Sulinash into battle before the Sundering, with songs still being sung of their deeds. [2a]

There has always been a great bond of kinship between the Elves and the Great Eagles, stretching back to ancient times. That bond remains strong between the Wood Elves and the noble avians, and many families of eagles choose to make their homes in the heights of the Grey Mountains, close by the borders of Athel Loren.[3][6a]

More intelligent and nobler of aspect than the smaller Warhawks that live on the lower mountain slopes, Great Eagles are creatures of unceasing vigilance, possessed of an abiding loathing for creatures of evil heart. Ever alert to the events occurring in the lands beneath them, the Great Eagles unceasingly carry news to the Elven nobles that dwell far below, giving them a welcome, and often crucial, advance warning of invasion or strife.[3][6a]

On rare or desperate occasions, a Great Eagle may offer itself as a mount to a particularly trusted Glade Lord. This is a great honour in the eyes of the Wood Elves, for it is a true partnership of equals. Such a union invariably forms the start of a great and enduring friendship that continues to bind both parties, even after death.[3][6a]