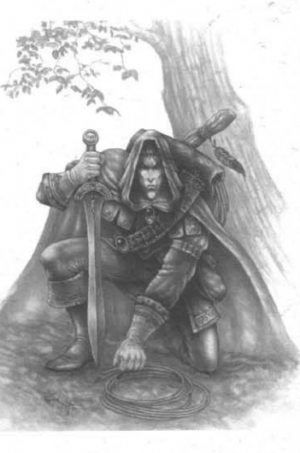 Scarloc is known both within and beyond the Athel Loren. Leading a band of Scouts he often ventures far into the lands surrounding the Wood Elf realm to gain advance warning of impending threats. Scarloc is skilled in the interpretation of track and portents and will sometimes even warn the Bretonnians if he finds signs of their common enemies. Thus he has become a trusted friend of many Bretonnian barons and is welcomed at their castles, especially when he brings the excellent venison of Loren. It is usually Scarloc who acts as the emissary of the King and Queen in the Wood and he who is sent to escort friends through the forest to the King's Glade.

Scarloc not only knows the Forest of Loren, but also has intimate knowledge of other great forests in the Old world acquired during his scouting expeditions. It is even said that there are small bands of his kin secretly dwelling in many forest utterly unbeknown to the rulers and peoples of these lands. They are undoubtedly there not as Waywatchers but to befriend and protect any Treemen or Dryads who may still dwell there. Scarloc's men have been known to turn up unexpectedly on many a far flung battlefield, screaming out of the trees to aid those ambushed or surrounded in the woods by Orcs or other vile foes.