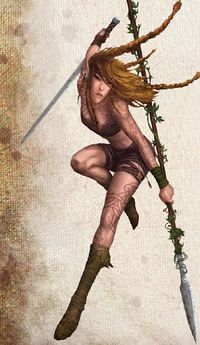 The Wardancers are servants and worshippers of the Elf god Loec and are the storytellers of the Wood Elves. [3b]

They gather in tightly knit troupes and wander through Athel Loren, coming across the halls of the Asrai to re-enact the history of the forest through intricate dance rituals. Other Wood Elves however regard them with as unpredictable and wild. [3b]

Wardancers dye their hair in bright colours and deocrate themselves with swirling designs in homage to their god. [3b]

In battle the Wardancers are deadly warriors who leap over the enemy and twist mid-air to strike them from behind. They can dodge even the fastest blows and are capable of avoiding incoming arrows. Wardancers elegantly dance around their enemies and deliver fatal blows before they can react. They are sometimes led into battle by especially skilled Wardancers known as Shadowdancers. [3b]

Each dancer has their own pattern that both complements and enhances those of the rest of the troupe. A dance for a Wardancer is a affirmation of faith as well as a re-enactment of past victories. [3b]

They form small bands that fight on land and sea as required by their captain. [2b]

Wardancers use a variety of weapons including swords, glaives and double-handed swords. [3a]