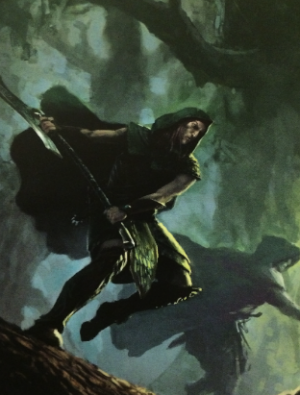 The Wildwood Rangers are an elite group of warriors within the Wood Elven realm of Cythral, charged with safeguarding kith and kin against the spirits that dwell within. Athel Loren is not a safe place, even for the Elves. Even now, thousands of years on from the first great council, there are those forest spirits who resent the Elves’ presence, and visit upon them whatever cruelties are in their power. Banished to the sinister south-eastern corner of Athel Loren, known as the Wildwood, these dark spirits rail against the waystone fence that confines them, and dream darkly of revenge on those who have occupied their home. In many ways, the Wildwood Rangers are expert monster-hunters, able to dodge the raging fury of battle in order to hunt down these monstrosity with great skill, speed and expertise honed during their time hunting the spirits of the Wildwoods.[1]

The task of guarding the border between this shadowy prison and the rest of Athel Loren falls to the Wildwood Rangers. Theirs is an existence thoroughly at odds with the gaiety and splendour known by other Wood Elves, for just as the creatures of the Wildwood do not rest, nor can those who have sworn to keep them trammelled. The waystone fence is ever under attack, and it suffers disruption more often than any care to contemplate.[1]

Any breach, however small, brings with it the risk of carnage as the dark spirits slip loose from their bonds and wreak all manner of havoc in the forest beyond. The Rangers converge on such breaches within moments of their formation, holding back the tide of dark spirits long enough for Spellweavers to make the waystone barriers whole once again. Thus must the Rangers be ever vigilant, so that their kinsfolk need not live in fear. Few take up the Ranger’s glaive without having suffered tragedy at the hands of the Wildwood’s denizens. Most have lost a loved one to a changeling; others have experienced firsthand the destruction caused by the rampage of an insane Treeman. A few, a very few, are purposefully recruited by other Rangers. There is honour in such an invitation, but pride is tempered by foreknowledge of the sacrifices that will be required. Once the Ranger’s path has been trodden, it is not easily set aside.[1]

Rangers do not triumph through physical prowess alone, but through a steadiness of will that other Elves find intimidating. Many of the Wildwood’s spirits are horrifying beyond measure, able to drive reason from an unsteeled soul with but a glance. Others cloak themselves in glamour and appear in comely and seductive forms no less dangerous. For a Ranger to survive, he must therefore harden his soul to all emotion. Not all are successful. Each year, some are lost to terror-born madness, or have their hearts ensnared by some siren of the Wildwood. Of the two fates, the former is by far preferable. Terror can be overcome in time, and a fractured mind repaired; but there can be no escape for those seduced beyond the waystone fence, just a life of stupefied servitude and false bliss that ends only in a death too long delayed.[1]

Though not answerable to any of Athel Loren’s lords or ladies, bands of Rangers will sometimes join a campaigning army. Here, a resolve hardened against the denizens of the Wildwood finds bloody employment against monsters possessed of vast and terrifying power. Always, the Rangers meet such foes with stoicism, hacking apart Minotaur and Dragon, Vampire and Daemon with a calmness and discipline that few Elves, though they be valorous souls by nature, can hope to match. Wildwood Rangers do not join such battles out of a desire for glory, or even to show common cause with their kin; they are driven by a far deeper purpose. Many dark spirits are shapeshifters or changelings.[1]

Most such creatures are driven by simple instinct and use their gifts only to imitate those they have murdered. A few, however, have the wit to inveigle themselves into the ruling classes of Athel Loren’s enemies, or to seek anonymity in the sprawling ranks of a marauding army. It is such creatures that the Rangers of the Wildwood seek when they march to war, though they seldom tell even the army’s commander of their true goal. To destroy such a prey, they will battle for many years and across untold leagues, lay waste to cities and slaughter thousands of beings whose only crime was to be deceived. Only when the changeling has been cornered and killed, its body reduced to lifeless ash, do the Rangers return to Athel Loren and recommence their silent vigil.[1]