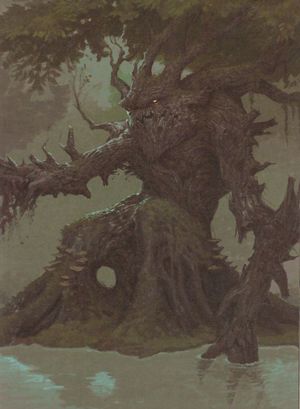 A Treeman is a powerful Forest Spirit able to bind its essence to a living tree. [1a]

Treemen are revered by both other forest spirits and the Elves that dwell within the forests. Most are extremely old, with a few that were ancient when the pact between the elves and the forest of Athel Loren was made. [1a]

Once bound to the tree, the spirit can no longer leave and it becomes a terrifying behemoth that can smash apart any creature that dares stand against it. Many minor spirits and spites live amongst their branches and roots whilst Dryad handmaidens tend to their needs. [1a]