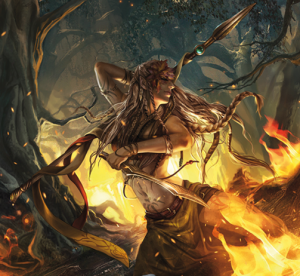 Shadowdancers are the closest thing that the Trickster God has to a priesthood, and they are both respected and feared as a result. They, and only they, know all the paths through Athel Loren — indeed, it is said that they tread the paths of the Dreaming Wood as surely as they do the mortal world. In battle, Shadowdancers are even more dazzlingly swift than other Wardancers. At other times they are less flamboyant, preferring to confound others with deceptions of the mind rather than swiftness of body. Indeed, many Shadowdancers can create illusions, which they inevitably use to further distract their foes or mete out a much-needed dose of humility to Elves or spirits that have forgotten their station.[1]