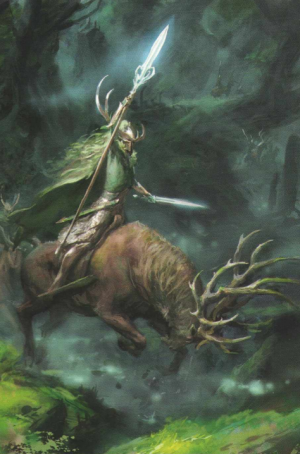 The Wild Riders of Kurnous are Orion’s personal honor guard, each as aggressive and impulsive as the King of the Woods himself. [1a]

They are fey and dangerous creatures who are no longer truly the Elves they once were. Now and forever they are a part of the Wild Hunt’s eternal glory. In appearance, Wild Riders are throwbacks to the ancient days of the Elves.

There is an other-worldliness and nobility about the Wild Riders that cannot easily be denied; the power of Kurnous flows through them as surely as it does through Orion. Throughout the winter months, while Orion’s spirit is dormant, the Wild Riders watch over the King’s Glade with eyes aglow, unspeaking save to challenge those who have intruded upon the most sacred of groves. Their authority is absolute, for in accepting the honour of becoming a Wild Rider, they have become severed from Wood Elf society in all ways save that of service to their king. Indeed, so alien are the Wild Riders to other Elves that few of their former kinsmen even dare speak with them, let alone challenge their deeds.[1a]

When winter rolls into spring and the ritual of rebirth begins, the Wild Riders lead the ceremony, binding themselves anew to the ever-king. In a night of magic and terror, when ghostly shapes and eerie cries haunt the glades, the lord of Athel Loren is roused once again from his death sleep. The clarion cry of Orion’s horn rings out across the Wild Heath and the hunt begins anew. All of Athel Loren trembles as Orion’s footsteps thunder through the forest, gathering speed and followers with every stride. In his wake come the Wild Riders, made stronger and more ferocious by the awakening of their lord.[1a]

The Kindred of Haroith attracts young and impulsive elves with many leaving as they mature. Other wood elves mistrust them, as they often react violently and are thought not to understand balance. Haroith comes from Harathoi which can mean boundless energy, jealousy and youth. [2a]

They ride not mortal mounts, but Steeds of Kurnous — manifest aspects of the hunt that are as tireless and determined as the Elves who they bear into battle. Only the bravest or most foolhardy individuals remain abroad when the horns of the Wild Riders are heard upon the breeze, for their otherworldly tones invoke the fear of the prey in all who hear them. Such an instinct is well-founded, for there is no mercy to be had from the Wild Riders once the hunt has begun. Those unlucky enough to be caught in their path are ridden down without mercy, their deaths a sacrifice to the timeless splendour of the King in the Woods.

Their weapons are things of crude iron, or even flint; their ceremonial robes and armour seldom more than the pelts of animals slain during their sacred hunts.