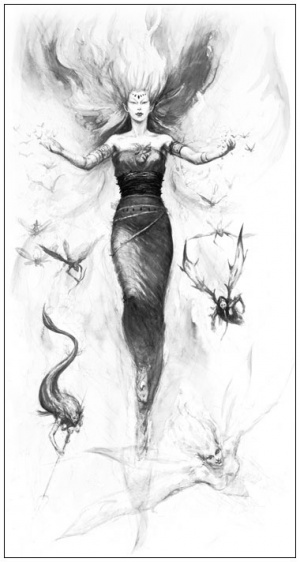 They are also known as Priestesses of Athel loren or Handmaidens of the Everqueen, most are part of the Kindred of Kel-Isha. Kel-Isha is taken from Quyl-Isha meaning the tears of Isha, endurance, sorrow and mourning for lost children. [1a]

On those rare ocassions that the Wood Elves willingly seek talks with other races, Spellsingers are usually the ones that conduct such discourse, travelling with a small entourage. [1a]

Their protection from the raw magical energy they harness comes from Athel Loren itself, the forests natural web of consciousness forms both a conduit and a shield to the Elven mages who draw upon its potent force. As a result of this connection, Spellsingers have a unique relationship with Athel Loren, in some ways then they can be described as half Forest Spirit, half Elf, as they are part of the greater intelligence of the forest, yet still retain individuality.

Spellsingers are able to commune with the woods of Athel Loren, often on behalf of the Elven lords and ladies. Some are even able to reshape the forest itself, changing the course of a tree's growth or even reshaping the pathways within the forest to hinder their enemies. Such a process however requires the 'permission' of the forest, and as such it often has to be persuaded or even tricked.[1a]

Wood Elf mages usually follow the path of Isha, specialising in the arts of healing, renewal and rebirth. They are capable of all manner of fey sorceries and artful spells, and are rightly feared by all.