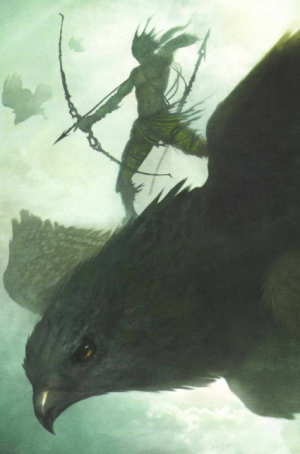 A Warhawk Rider soaring into battle.

Many large birds of prey live in Athel Loren, especially where it covers the foothills, ravines and crags of the Grey Mountains. These hawks and shrikes grow to far grander proportions than similar species found elsewhere in the world, though why this should be remains a mystery. Some scholars speculate that such birds were once a common sight across many lands but have long since been hunted into extinction elsewhere, whilst others claim they have been changed by magic. Wherever the truth lies, the hawks of the Grey Mountains commonly grow to such a vast size that their wingspans that can average fifteen to twenty feet.[1a]

Though most Elves live beneath the protective shade of Athel Loren, there are those who crave the more sparsely forested uplands of the Grey Mountains, and so a strange kinship has developed between the two races. Upon the middle slopes of the mountains, Elven halls are fashioned close about the great rocky spires upon which the hawks make their nests, eyries adorned with the sun-bleached bones of those who have dared intrude upon their territory.[1a]

A fledging hawk raised by an Elf develops a powerful bond with its master, and will even bear him into battle. As time passes, rider and hawk become almost one creature, existing for the call of the hunt and the thrill of the chase alone. These Warhawk Riders scout their territory for invaders, and are skilful enough to guide their steed down through the trees to strike at intruders. Those who ride the Warhawks display phenomenal agility and balance, able to launch volleys of arrows while their mount flits and darts through the forest at speed. In this way, an intruder who strays into the Pine Crags and other mountainous realms faces not only the fury of the hawks, but also that of the Elves — as a number of Dwarf expeditions have found to their cost.[1a]

Long ago the Warhawks fought against the Wood Elves and many on both sides were killed, eggs were killed and chicks slaughtered.[3a]

The Beast Caller Kirada made peace between the two races, with the those who had killed the birds young offering themselves up for sacrfice. However the Warhawks rather replied that they would take their children and raise them as their own - becoming the first Warhawk Riders. [3a]

Most kindreds are from the Pine Crags are known as the Brethren of Seth, Dawn Riders or the Kindreds of Sethayla. Sethayla is derived from Sethau which can means Cry in the mountains, flight and wind. [1a]