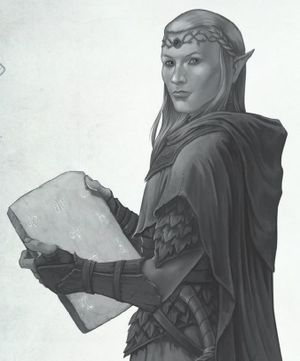 A tall, well-muscled, long haired Wood Elf with auburn skin often going bare-armed when to show off a criss-crossing web of ritual scars that overlap the burn marks from their childhood. [1a]

The lone survivor of a forest fire that struck a small community of Eonir at the edge of the Laurelorn Forest, Nayadaryn was adopted by the von Brachen family of Middenland. Life in the castle was unhappy but took a dark turn when they discovered a collection of Elf artefacts hidden in a secret treasury and that her foster father was responsible for the fire that had killed their family. Nayadaryn took revenge on Heinrich von Brachen and his family, burning them and the castle to the ground. [1a]