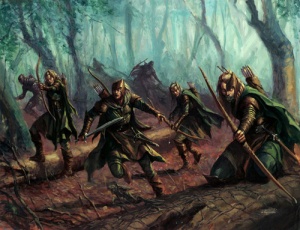 A unit of glade guard hunts down intruders in Athel Loren

When the need arises, every Asrai can answer the call to defend the forest of their homeland. All Wood Elves are taught the skill of archery once they are old enough to wield a bow. Once a Wood Elf comes of age, he or she is inducted into their household's Glade Guard and is given the responsibility of patrolling a section of the forest. It is the Glade Guard that first respond to intruders in the forest, swiftly killing the unwelcome before they know of the danger.[3a]

Glade Guard are the core of the Wood Elf army on the field of battle. Households fight alongside one another under the command of the nobles of their realm. Glade Guard fight in a manner that seems uncoordinated to other races. While all soldiers are expected to follow the broad orders of their general, each group is expected to take the initiative when the opportunity arises rather than wait for a command. The end result is a line of battle that undulates out and back in over itself while a rain of arrows pours into the enemy. [3a]

Every glade guard carries one arrow among his quiver made in Torgovann and inscribed with "Ethris Yl Idrion", meaning "Tears of the Maker"- a reference to the elven god Vaul. This arrow is only to be used in dire situations.

Deepwood Scouts patrol the darker, more dangerous sections of the forest deemed too risky for other Glade Guard to enter. A Deepwood Scout must mask his sight, scent and even his soul from potentially otherworldly predators. Scouts are masters of ambushes, training well in the arts of stealth and concealment and can follow an enemy force for days before appearing just after the battle lines meet to cause confusion in the ranks.

Elf bows are made from the lornalim tree. [2a]