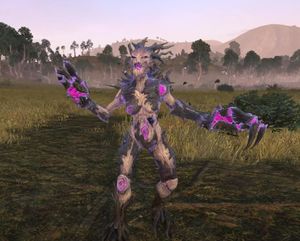 Drycha is an incredibly old Branchwraith Dryad, who is said to remember the time before the Wood Elves arrived in Athel Loren. Many believe that she lost her mind when Cyanathair's foul blood was spilt on the ground of the Glade of Woe, the area of the forest to which she was bound. Many also speculate that it is this madness that has caused her deep distrust and hatred of the Wood Elves.

She is known to have been in contact with Coeddil, an ancient Treeman whom also has a deep distrust of the Elves, and has attempted a coup before, but was thwarted by Ariel. If these two ancient beings have found a common cause it is only a matter of time before the balance of the forest is thrown into disarray.

She once attempted to take over Athel Loren during one of Orion's absences, but was banished by the Grail Knight, Calard of Garamont.

In recent years, tales have reached Athel Loren and the Wood Elves of attacks throughout the forests of the The Empire and Bretonnia which bare the hallmarks of attacks made by the Asrai, although they were not instigated by Ariel's court. If these attacks were the work of Drycha and her handmaidens there must surely be some greater goal other than random slaughter, and its almost certain that that particular goal does not bode well for the Wood Elves. Indeed even Naieth the Prophetess cannot see the destination to which Drycha strives, for it is so drenched in blood.