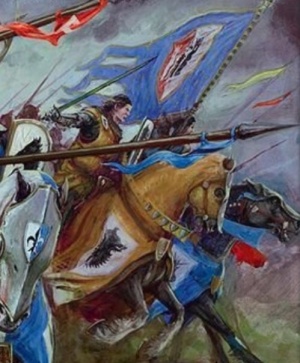 Knights Errant are those young sons of Bretonnian nobility whom have yet to prove themselves worthy to become a honored and fully-fledge Knight of the Realm.

All noble sons of Bretonnia are committed to the path of knighthood from the moment they are born.

Whilst in the service of a senior knight, Baron, A Duke or King they will use the colours of the Dukedom or those granted by their liege-lord and do not display balzons. [1a]

In ancient times the Bretonni villages had a custom for the bravest young man to be maintained with the best arms and armour they could muster, given the best food and drink. In return they were expected to train constantly and fight any enemy that might arise to threaten the village. Residing in the village watchtower and able to take the fairest maiden in the village as his wife, they became known as Knights. [1b]

Life of a Errant Knight

Upon reaching adulthood, an age that varies slightly from family to family but is always in the late teens, a male noble is dubbed a Knight Errant and sent out into the world to prove himself.

A young man who takes the role on Knight Errant must arm and equip themselves as best they can until they reach the fill rank of Knight and are granted a village and castle of his own. Hopeful Knights Errant ride in the retinues of dukes and the king waiting to be dispatched on the errand that will earn them their knighthood. [1c]

The errand or task that they must accomplish to become a true Knight is normally set by their patron - be that a fair damsel in their village or the liege-lord with whom they ride. [1d]

In Bretonnia, knights start off riding their own trail, as they set off on their errantry tour. Bretonnian knights learn from the best school there is: genuine experience. At the start of their tour, they don’t have any genuine experience, but most make up the deficit with their enthusiasm. Social pressure to pursue the perils of errantry is very strong, and so most nobles at least make a show of it. As a result, at any time there are large numbers of young nobles travelling around the country, looking for trouble and thus combat.

Travelling the roads of Bretonnia alone is perilous even for Grail Knights; for young Knights Errant, it is almost suicidal. Some knights travel alone for precisely that reason, hoping to meet with glorious adventure but often finding a cold and lonely death instead. Most knights, then, find travelling companions. Other Knights Errant are the most popular choice, as they are of the same social class and truly understand your concerns. However, this is a case of the blind leading the blind, so wiser or luckier knights find themselves joining up with adventurers from a variety of backgrounds and social classes. Knights expect to be the leaders of such groups, of course. When a Duke begins to marshall support for a campaign, Knights Errant are honour-bound, flocking to his banner in the thousands. In the prime of youth, these ill-experienced but highly eager warriors comprise a significant portion of many Bretonnian armies.

Knights Errant project an air of bravado in many everyday situations, dealing with peasants and fellow Knights alike with a brash self-confidence and haughty manner. Eager to prove their skill, and thus attain status and renown, these young nobles are bold and enthusiastic to the point of recklessness. Knights Errant are renowned for answering any and all call to arms wherever it is sounded. They are also the first in line for any charge and the last to retreat, as their headstrong nature overwhelms their common sense and their sense of strategy.[2a]

On the battlefield they are impetuous, eager to earn fame and honor in the thick of the fight. They charge bold into the fray, heedless of danger and earning either great honor or a glorious death. Fighting on horseback, these Knights often engage the best enemy regiments in their eagerness to earn the title of a Knight of the Realm. The older, more experienced Knights rarely discourage them. Some see it as a way of pruning the ranks, others as a suitable outlet for the enthusiasm of youth, but none would deny a young knight his destiny. Those whose skill and bravery are proven will go on to become Knights of the Realm.[2a]

Many Knights Errant are not allowed to use a lance or helmet, for that is the privilege of a true Knight.