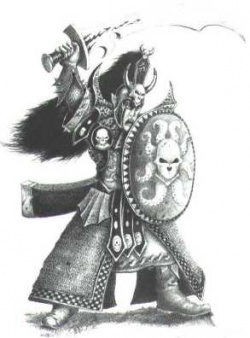 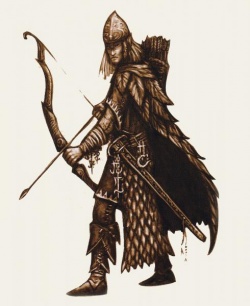 Compared to humans, Elves are tall, fair-skinned, and slender. Most artworks portray them with high cheekbones, slightly angular faces and slanted eyes. Some depictions show them with black eyes, while others show them with normal pupils/irises. High Elves are often shown with blonde hair, Wood Elves with brown and Dark Elves with black but these changes are minor and the three groups are for the most part physically indistinguishable. Elves are slender in build but strong. Assuming they do not die a violent death, Elves are capable of living for thousands of years. It is not considered impossible for an Elf to live to the age of 6,000, although this would be extremely unusual. Most often an Elf will not die of old age in the human fashion, rather he or she will simply grow weary of the world's troubles and lose passion for life, eventually passing away. [2a]