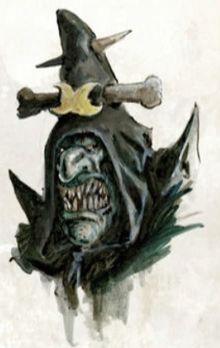 Brak Batwing was a Night Goblin Shaman, who fought during the End Times.

Deranged and addicted to mushrooms, Night Goblin Brak Batwing was nonetheless a mighty shaman who wielded arcane power to deadly effect. Before he descended upon the Black Peaks, Brak had stumbled upon a particularly potent batch of fungi. Although these left him incapable of uttering a coherent sentence, they made his spells terrifyingly effective during the first half of the battle. During the last stages of fighting, however, Brak's stomach cramps and natural cowardice got the better of him.