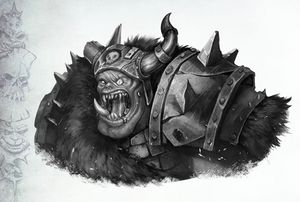 Skarok Gnawrock is a Orc Big Boss and former leader of the Bonecracker Tribe. [1a]

Skarok is quite unemotional for an Orc, channelling his natural rage only when he needs it. Although he has a rudimentary cunning, for smart stuff he turns to his trusted Goblin advisor, Von Maggot. He dislikes talking, usually having Von Maggot speak for him. [1a]

His head is covered with deep scars with a single massive fang jutting from his maw and a only a single yellow eye gleaming evilly from his brutish face. A false eye, carved from rock and crudely painted, is rammed into his left socket. His body is a hulking mass of iron sinew confined within rusting, battle-worn armour with his severed left hand ending in a crude metal claw. [1a]

The Black Orc known only as the 'Ard Face deposed him whilst he was recovering from an injury incurred whilst hunting a Wyvern. [1b] Since then he has spent his time with the few remaining greenskins loyal to him, plotting his revenge. [1a]