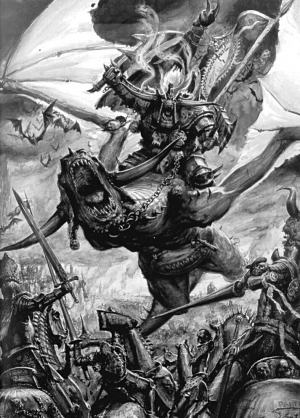 Azhag the Slaughterer is one of the most infamous Orc Warbosses in recent history. He has brought a trail of ruin and destruction to the northern lands of the Old World, laying waste to cities, fortresses and mountain strongholds wherever he goes.[1]

Atop Azhag's head lies the key to his power and uncommon intelligence in tactics and warfare -- an ominous iron crown which emanates an ancient evil long thought forgotten from history. It is from this crown, a relic of olden days, which granted Azhag sorcerous powers and gave him the vision he needed to command a Waaagh! of epic proportions. In time, rivals were beaten and whole tribes were soon conquered as Azhag's notoriety grew within each passing conquest. The ominous crown, known in ancient times as the Crown of Sorcery, would constantly whisper into the primitive mind of the Orc Warlord, telling him of a grand conquest that lies to the south, of a great plan that needed to be fufilled. Victory once more followed victory, and after much notoriety, the deeds of Azhag had travelled far and wide, luring Greenskin tribes by the dozens into joining him on his Waaagh![1]

Azhag is unlike any Orcish Warlord that had lived and died before him. With the crown controlling his mind, Azhag began to use un-Orcish words and often tried to explain orders to his subordinates instead of simply cracking skulls and bellowing orders. However, a Greenskin's personal will is far to strong to simply erase, and at times the Crown and Azhag's willpower often struggle for control. Such events have left the Warlord in a trance-like state or making him move slowly, as if sleepwalking. Even on several occasions, his subordinates have seen the Warlord argue with himself constantly or towards an invisible advisary. Yet none could hope to outright defy the Warlord, for even in his state, he was still immensely powerful beyond reckoning. Once battle has been joined, Azhag is a comet of destruction, descending from the sky to wreak havoc amongst the enemy army, his eyes and his crown ablaze with sorcerous light. The Greenskins under his command know he's not quite right in the head any more, but still, his victories have given them a fight and the spoils of war, that is incentive enough for his troops to follow him to the ends of the earth.[1]

The legend of Azhag the Slaughterer truly began within the chaos-corrupted lands of Troll Country, located to the uttermost north of the Old World. Monsters and packs of Trolls stalk that deadly land, while Chaos warbands raid from the north. There is no safety amongst Orc kind, as the different tribes of Troll Country are bitter rivals, eager to destroy each other whenever they meet. All of that changed the day a lesser and little-known Orc chieftain by the name of Azhag found a mysterious crown. When attacked by heavily armoured Chaos Warriors, Azhag and his mob were forced underground into the labyrinthine ruins of what had long ago been the city of Todtheim. After fighting off the daemonic monstrosities that lived in the cursed city, Azhag wandered into the den of a multi-headed Chaos Troll.[1]

Azhag slew the beast and amidst its bone-strewn den found an ancient crown. Unsuspecting of its true nature, Azhag placed the iron band upon his head. Instantly, strange thoughts flooded his mind. He was able to lead the survivors of his mob out of the serpentine under-passages of Todtheim. Indeed, it was almost as if Azhag knew the way. From then on Azhag was changed. The crown soon became a permanent fixture atop his scarred, green head. He took to muttering to himself and often spoke in a decidedly un-Orcy voice. Unknown to his mob, the crown was working its arcane control on their leader, for it was an ancient and terrible device that had once belonged to the Liche Lord Nagash, and a fraction of the Great Necromancer's dread power still clung to the iron band. As the immeasurable will of Nagash weighed upon him, Azhag was not entirely Azhag anymore. However, though the Orc psyche is a simple one, Azhag's mind had its own singularly determined strength. Despite the crown's exertions, it could not possess Azhag.[1]

The Rise of Waaagh! Azhag

With whispered advice or sudden jolts of arcane power, the crown aided Azhag. Orcish brutality augmented by ancient guile and dark sorcery made for an unbeatable combination. During that year Azhag rose to become not a chieftain of a down-beaten, wandering mob, but a mighty Warboss of a bold and swaggering Waaagh! Through cunning, force or foul magic, Azhag outmaneuvered all rivals. The northern Orc tribes were united as never before. Word of Azhag's great victories spread far and his forces were swollen by hordes of Night Goblins from Red Eye Mountain. They brought, as favour to their chosen leader, an enormous and exceptionally fierce Wyvern. Without being hand-reared from an egg, few Wyverns can be broken to serve as a steed. Yet such was his force of will that Azhag subdued the beast with but a single glance. Skullmuncha, as the Wyvern was named, was vicious and temperamental, yet acted almost docile to its new master.[1]

Ruling over rabble could never sate the crown, for it wished to return far southwards, to reunite with its rightful master. Compelled by a will not his own, Azhag led his Waaagh! into Kislev and stormed into the northern provinces of the Empire. With brain and brawn so closely aligned, nothing could stop the greenskins. Time and again Azhag proved that he was no ordinary Warboss, relying on tired old `outnumber and charge' tactics so ingrained in most greenskin leaders. Here, instead, was a deft commander capable of complex strategies. When superior tactics could not crush the enemy, Azhag himself would take to the fray. Few foes could stand the hurtling charge of Skullmuncha, but if they did, Azhag broke them using foul magics and dark sorceries. At Butcher's Hill, Azhag earned the moniker `the Slaughterer'. After ingeniously using hordes of Goblins and Snotlings to trap his human enemies in a pincer movement, Azhag utterly destroyed the remaining defenders, bodily and mentally, with a barrage of fell spells. The massacre earned Azhag a place amongst the most hated of Man's foes.[1]

It was at the Battle of Osterwald that finally Azhag met his doom. Countering a charge by the Knights Panther, Azhag ordered Skullmuncha into the thick of the fighting. The crown, angered at the invasion's circuitous route, sought greater control over Azhag. The mental duelling left the Orc Warboss distracted and in his moment of weakness Azhag was slain by the Grand Master of the Knights Panther, Werner von Kriegstadt. [2a]

Without the evil genius to guide them, the greenskins were soon routed, although Skullmuncha continued to guard the body for some time. [2b] As for the crown, the Empire's Grand Theogonist recognised its foul nature. Refusing to touch it with bare flesh, he took it back to Altdorf, where it was placed in the deepest vault of the Temple of Sigmar. There its ancient evil could be guarded for eternity by powerful warding spells. [1][2a]

Azhag was one of the greatest Warbosses to ever live, rivaled only by the likes of the mighty Gorbad Ironclaw and Grimgor Ironhide.