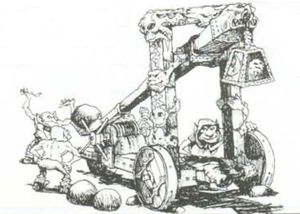 A Rock Lobber, also known as a Stone Thrower is the greenskin name for a catapult.

Rock Lobbers are usually powered by twisted Squig hide ropes, which create enough power to hurl large lumps of rock across the battlefield. Rock Lobbers sometimes use counterweight mechanisms to propel the missile.

They are sometimes accompanied by an Orc Bully to 'encourage' the Goblin crew. [2a]

It is said they were first used by the horde of Raggob the loon, created by Ulgrakh Gutripper, both of whom were later carried away by a vast black bird. [3a]

Rock Lobbers come in several shapes and sizes and are often given colourful names such as Skull Crusher or Man Mangler. [1a]