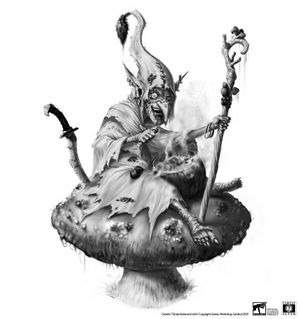 Like many of his kind, Cacklespit is inspired by the consumption of magical fungi, recording dreams and whimsies as painting images on the mountainsides near his lair. These colourful but crude creations depict sboth past events as the titanic struggle between entities that shaped the nearby mountains, and future, such as a great Orc Waaagh! which will lead the Madcraw loot and glory. Finally its shows that the arrival of a group of strangers will ensure that nothing is ever the same in Madcraw lands again. [1]

His underlings both fear and respect, but also envy his exclusive access to the Purple Cap mushroom colonies and if there is a suitable opportunity, will eagerly dispose of their leader. [1]