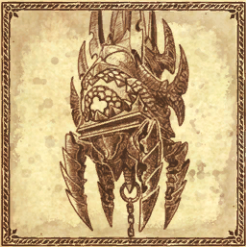 A Watcher of Tzeentch.

Watchers of Tzeentch were large Daemonic eyeballs who acted as sentinels for the Raven God.

Floating serenely in nearly every corner of the Inevitable City, the Watchers of Tzeentch silently observe the events of the city. The Watchers are anchored to the ground by thick chains, and are little more than seemingly harmless, if unsettling, eyeballs. However few interfere with their vigil, less they risk the wrath of powers unseen.