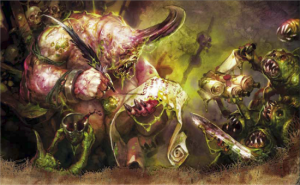 Epidemius, Tallyman of Nurgle, The Plagued Panjandrum, Reckoner of Mortality[2a] is a Daemonic Herald of Nurgle who is the cataloguer of all the Plaguelord's diseases.

Epidemius is one of the seven (seven being the sacred number of Nurgle) Proctors of Pestilence and and the chosen Tallyman of Nurgle, whose work is to record all the diseases of father Nurgle. Epidemius' task is an unending one, which generates a large amount of scripture, so he rides a Palanquin of Nurgle to share the burden - and to more easily force a path through Nurgle's hordes and enemies alike. [1a]

He travels through both the mortal world and the Realm of Chaos, studying plagues and the ebb and flow of disease. Whenever a soul he is observing dies, ushering it into the paternal and welcoming embrace of Nurgle, his entourage strike gongs and bells. [1a]

He is a potent spellcaster using Nurgle's lore and is able to increase the power of himself and other Nurgle Daemons when his patron gods enemies fall in battle.[1a][2a]