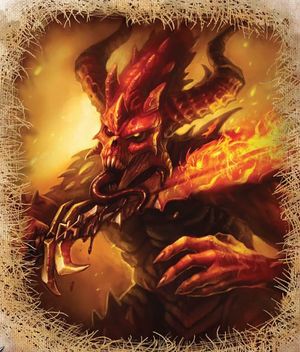 Bloodletters are lesser daemons of Khorne, less commonly known as Khorne's Chosen, Teeth of Death, Naked Slayers, Takers of Skulls, Horned Ones and Khak'akamshy'y in the Dark Tongue.[1]

It is said that fortunate mortal followers of Khorne are transformed into Bloodletters. [4a]

Bloodletters compose the majority of the daemonic hordes of Khorne. They stand as tall as a man, but their bodies are thin and wiry, with crested backs and broad shoulders. Their skin is red and scaly. Their heads are elongated with long horns, sharp needle-like teeth and long serpentine tongues. [4a]

In battle, Bloodletters tend to forgo strategy and tactics in favor of bounding from foe to foe, hacking with their Hellblades as they go. Their blows are unearthly strong, able to slay a Dragon with a single strike. Bloodletters do not use magic and gain some resistance to it from Khorne.