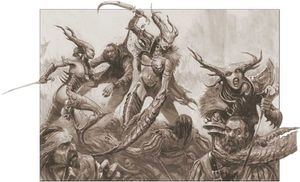 Daemonettes are lesser daemons of Slaanesh, the most numerous of the Dark Prince's subjects. [4a]

They share the androgynous or hermaphroditic depiction of Slaanesh and are known for their speed and for their sharp claws. They own a perverse beauty, unnatural and disturbing, but at the same time, undeniably potent. They have large, green eyes which glow with a malevolent inner light. Their hair and skin are naturally white but both their hair and bodies are frequently dyed various colours. [1][4a]

Unlike the other gods of Chaos, Slaanesh surrounds iself with a full court of powerful daemonette emissaries and handmaidens. These heralds of their god attend to their masters varied desires and whims but also manifest in the mortal world returning with morsels of intrigue to Slaanesh. However even they must take care because the Dark Prince is tempesteous and capricous. [4a]

Daemonettes also stalk mortal battlefields, seeking the dead pledged to Slaanesh or those who lived a life of excess. They may then bring them to the palace of the Dark Prince in the Realm of Chaos where the faithful are rewardded with new immortal life in a paradise unbound by mortal strictures. For those who foreswore their dark lord however, eternal torment awaits. [4a]

In their original (3rd Edition) version, units of daemonettes could cast spells. [1] This ability was removed in 4th Edition.

Their daemonic name is Q'tlahs'itsu'aksho.[1] They are also known as Bringers of Joyous Degradation, Children of Slaanesh, Debauched Ones, Decadent Seekers, Givers of Indescribable Delight, Seekers of Decadence, Young of Slaanesh'. [1][4a]

Although a worshipper of Slaanesh may be able to summon them, they may in turn demand that they sacrifice one of their company before they will depart.[1]

Whether or not both arms of a daemonette end in claws varies from depiction to depiction, as does whether daemonettes have one breast or two. In addition, in Slaves to Darkness, daemonettes are described as possessing a perverse and unnatural beauty which caused loathing instead of admiration. [1] Hordes of Chaos and Daemons of Chaos describe daemonettes as possessing an aura which disguises their true nature and causes them to appear beautiful and beguiling.[2][3a]