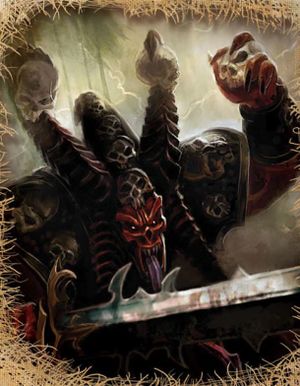 The Skulltaker, also known as U'zhul and as Vrkas, was a seemingly unstoppable Chaos Champion who became a mighty Daemon Prince of Khorne.

Vrkas was a mighty Kurgan Warlord and Zar of the Dolgan tribe, forging disparate warbands into a mighty army he led them against the forces of the Tong. A hundred warlords fell to to the Dolgan's axe, but with each defeat the warriors of each chieftain swore fealty to Vrkas and his army swelled.

Vrkas lead his army into the Tong's homeland and slaughtered all in his path, it was during the greatest battle that he finally met a worthy foe. Teiyogtei Khagan was the greatest tong warlord to have ever lived, wielding the daemon sword Bloodeater, the great Tong was able to best Vrkas with his superior weapon. Vrkas was captured and spitted atop a spike, days went by as he was slowly impaled and tortured. Whilst any other warrior would of begged for death Vrkas was consumed by hatred, Khagan had denied him a warriors death and so he pulled himself from his spike and crawled across the wastes, his entrails following behind..

Vrkas came across a mighty Forge, it was here that Teiyogtei Khagan had forged his mighty weapon. As he approached dying, a voice called out to him from the forge itself, a mighty Bloodthirsters soul had been enslaved to power the Forge. Defeated and destroyed long ago by Khagan the Bloodthirster had guided Vrkas to him as an instrument of revenge, he empowered the dying Vrkas with the Forges might, gifting him near impenetrable armour, regeneration and a sword as black as midnight. Vrkas was reborn as the Skulltaker.

Over the coming years the name of the Skulltaker was made legend, a tireless Chaos Champion of Khorne, who challenged and slew any warlord he encountered, offering their skulls to the Blood God. The Skulltaker eventually returned to the lands of the Tong, intent upon his ultimate revenge...

Facing Teiyogtei Khagan in his mighty kingdom, The Skulltaker engaged in a duel of epic proportions, the two Champions clashed with Daemon blade and fought for days, eventually Skulltaker was able to mortally wound his enemy, but not before Teiyogtei drove Bloodeater into his stomach. Vengeance should of been fulfilled and the Skulltaker should off died that day, but he could only be banished not destroyed. Such was Khorne's blessing upon the vengeful warrior.

The Skulltaker would return hundreds of years later to destroy the Tong's homeland. Slaughtering each of Teiyogtei's successors he offered their skulls to his ancient forge and thus destroyed their entire realm, drawing it into the lands of Khorne and erasing it from existence in the mortal world. The Skulltaker was rewarded for this with ascension to Daemonhood, taking on a form resembling a mighty Bloodletter and wearing a cloak of skulls, the man known as Vrkas had became one of Khornes mightiest followers.

He challenged Sigmar in the early years of the Empire and was bested for the first time, a scar on his head a constant reminder of that defeat. [2a][3a]

Skulltaker is said to be swifter and stronger than any of his brother Bloodletters and that he knows the weakness of every enemy. Unusually for a Daemon of Khorne, he fights cruelly, shattering his opponent’s limbs one by one until they are rendered powerless. He then takes their heads in his clawed hands and burns the flesh from their skulls, taking it as a trophy to the brass citadel of Khorne, mounting them upon the parapets beside the skulls of his other victims. Legends say that he is drawn to tales of prowess and is keen to pit his skills against the mightiest of mortal champions [2a] and he will appear before castles, Necropolises, Dwarf Holds and Ogre Frosthalls to challenge any champion they might send out. [3a]