From Warhammer - The Old World - Lexicanum
(Redirected from The Changeling)
Jump to: navigation, search 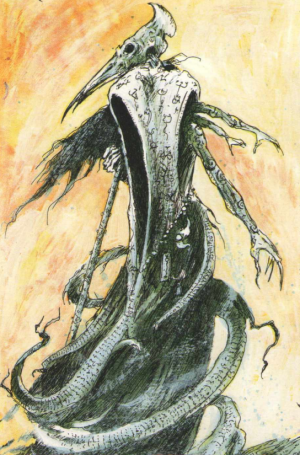 The Changeling, known as the Perplexing Prankster, the Deceiving Horror, or even Tzeentch's Trickster, is the greatest of the Horrors of Tzeentch.

The Changeling personifies the part of Tzeentch’s psyche that is the meddler and the deceiver. It is the ultimate trickster, who can take the form of other beings, from the tiniest of insects to the most massive of Greater Daemons. None, save perhaps Tzeentch himself, knows the Changeling’s true form, for he goes cowled and cloaked when in his own shape — perhaps even the Changeling himself has forgotten it.[5a] Not only can the Changeling mirror the form of another, he can adopt mannerisms and personalities in so flawless a fashion that even the Dark Gods can be deceived. In all of creation there is only one entity that the Changeling cannot duplicate: the Great God Tzeentch himself. The Grand Schemer will not suffer any being to steal his identity, even for a moment. [1a]

Though Tzeentch loves to take credit for the Changeling's schemes, only a handful of the Daemon's adventures are carried out at his patron's directions. The Great Schemer is content to let the Changeling roam wild through eternity, causing havoc where he may. Each meddling opens up more possibilities in the Great Game, and Tzeentch watches with amusement as the Changeling weaves his uneven tapestry of disruption. That so many of his pranks have caused terrible wars is of no concern to the Changeling. He loves the discord of conflict, for it breeds opportunity to deceive and dismay like nothing else. His enjoyment begins even before armies clash: impersonating messengers and generals to disrupt strategy wherever possible. When battle begins, the Changeling will adopt the shape and skill of the most powerful foe, pounding the enemy to pieces with malicious enthusiasm and borrowed muscle. [1a]

Afflicted as he is with low tolerance for boredom, the Changeling exists to play malicious tricks upon all about him. On one occasion, taking the shape of a Daemonette, he stole the silver apples of knowledge from Slaanesh's palace. On the edge of the Dark Prince's territory he then assumed the form of a Plaguebearer and slipped into Nurgle's garden, only to grow tired of the game and abandon the apples to rot amidst the decaying fronds. When Slaanesh discovered the theft, he flew into a rage and sent his armies to retrieve the lost treasures. So did Slaanesh and Nurgle come to blows, the former believing the latter to be a thief, and the latter convinced the former had engineered a pretext for invasion. [4a][5a]

The Changeling was already elsewhere -- stealing Collars of Khorne from Flesh Hounds and melting them down to create brass dioramas of the Blood God's greatest defeats. So has the Changeling passed through eternity, sowing mischief in his wake. It was he who cut away Slaanesh's hair while the Dark Prince slept, and from it wove the cloak that Tzeentch presented to the mortal champion Egrimm van Horstmann. It was the Changeling who sealed the doors of Khorne's citadel while he was away campaigning, forcing the Blood God to shatter his own proud gates when he returned.[5a] The Changeling's handiwork is always obvious after the fact -- indeed, part of the prank is to make the victim aware of his deceiver, but impotent to act against him. [4a]

It is of little surprise then that Tzeentch's brother gods burn with desire to destroy the Changeling, to tear him limb from limb and scatter his parts and pieces across reality; yet somehow he always evades capture.

The Treachery at Tlanxla: In the year 703, the Changeling took the form of the Liche King Arkhan the Black. So disguised, he promised a cabal of Necrarch Vampires untold sorcerous knowledge in exchange for their assistance in an attack on the Lustrian temple-city of 'Tlanxla. Whilst Zombie hordes fight Tlanxla’s Lizardmen protectors to a standstill, the Changeling’s Daemons ransacked the treasure vaults of both sides, swiftly overwhelming defences weakened by the ongoing battle and claiming many mighty artefacts — which they then devoured.

In 2522 IC, the sorceress Morathi attempted to summon and bind Fateweaver to her will upon the Wretched Altar but the Changeling disrupts the black ritual mispronouncing a single syllable. A host of Daemons took possession of many acolytes resutling in the Battle at the Wretched Altar which Morathi barely survives. [6a]

At some point during this time Ar-Ulric Emil Valgier was murdered by the The Changeling. The daemon then masqueraded as Valgier, assassinating other important figures and sabotaging Imperial defense efforts. Ultimately, with his puppet Balthasar Gelt, the daemon orchestrated an assassination attempt on the Emperor but was foiled and destroyed by Valten and Ludwig Schwarzhelm.