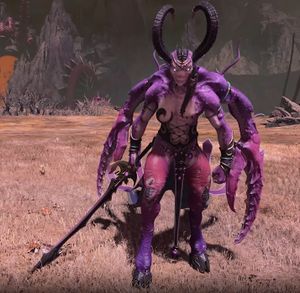 N'Kari is a Keeper of Secrets, a Greater Daemon of Slaanesh. [1a]

A great mass of solid muscle standing half again as tall as a Elf, it has two mighty arms tipped with huge pincers and below these two smaller arms and hands. [1b]

He led a horde across Ulthuan, storming and burning cities, sacrificing thousands of elf-children, creating thrones made from the fused bodies of still living elf-women. [3b] Aenarion first slew the Daemon at Korumel in what is now Ellyrion, banishing it from the mortal world. [1a] [3a]

When Aenarion was defending the creation of the Great Vortex, N'Kari was one of the four Greater Daemons, each representing one of the four Powers of Chaos, sent to slay him. Again he was defeated, the Phoenix King crushing his heart with his own hand after the Sword of Khaine had sliced open the daemons chest. N'Kari, much weakened and reduced was then trapped within the vortex for thousands of years. [3a]

Over the millennia of his imprisonment he reclaimed some of his power, finding gaps, holes in its construction, places where he could break out when the time was right. [3b]

In 2173 IC after breaking free from the Vortex, N'Kari began a killing spree across Ulthuan, targeting the descendants of Aenarion. [2a] He gathered an army of Beastmen, shipwrecked humans and elvish cultists, growing strong enough to attack Tor Yvresse itself. After they had breached the walls and began a bloody rampage, he abandoned them to seek two more descendants of his ancient foe. [3c] Discovering that the remaning descendants had been moved to the Shrine of Asuryan, he summoned additional help including a Lord of Change with whom he made a pact. [3d] It was finally defeated and slain at the Shrine of Asuryan later that year. [2a]

A century later Malekith himself summoned the Daemon in a cavern beneath his winter citadel and intrigued it answered the call, bargained with the Witch King only to be bound directly to his will through magical bracelet and chains. [4a]

It was defeated by Teclis and again banished. [1b]

Tyrion confronted it at the Altar of Khaine and slew it once more. [1b]

To summon N'kari requires a specific sacrifice of virgins in a correct ritual manner but even then, it often allows itself to be called only to destroy the impudent mortal. [4a]