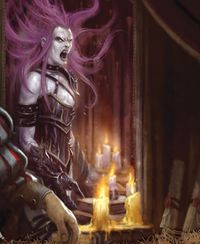 Kelsydra is a powerful Daemon of Slaanesh. [1a]

Many centuries have passed since she was conjured into the Old World by the desires of men and women who she both indulged and exploited. [1a]

In about 2015 IC she arrived in the town of Ubersreik where she took great joy in tormenting the von Bruner family, seducing daughters and sons but always ensuring there would be future generations to play with. [1a]

In Heller von Bruner however, she met her match for he was a Wizard of the Light Order and whilst he fell in love with her he was able to trap her within a mirror. Unfortunately the same magic that held her prisoner also maintained the mirror and so he was forced to merely hide it away. [1a]

Many decades later Kelsydra was able to reach out to the Cult of Eternal Promise who took the mirror as a relic, but she was unable to free herself before they were exposed and destroyed. [1a]