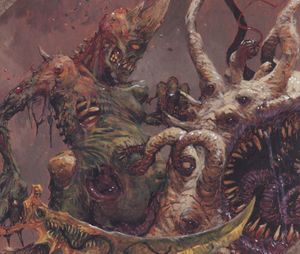 Plaguebearers are the rank and file Lesser Daemons of Nurgle's legions. [4a]

These loathsome Lesser Daemons are crafted from the blighted soul-stuff of mortals who have been slain by Nurgle's Rot. Many who have contracted the disease seek death in other ways to escape this fate as a Plaguebearer carries the mark of Nurgle's Rot throughout eternity.[4a][1a]

Plaguebearers embody the mortal need to impose meaning and order on the world and so it is the Plaguebearer's eternal role to herd Nurgle's daemonic forces in battle, as well as keep stock of the diseases, allocate appropriate fates to each new victim and attempt to maintain order amongs a naturally chaotic horde. These onerous duties have earned them the title of Nurgle's Tallymen in popular lore.

Plaguebearers are by no mean identical in appearance and ability, for Nurgle's Rot is somewhat variable in its virulence and incubation. The longer a victim can endure against Nurgle's Rot, the greater in Nurgle's sight shall be the resulting Daemon. From the souls of such hardy individuals are shaped the Heralds of Nurgle who march in the daemonic legions as proof that even the strongest and ablest cannot indefinitely defy disease and despair.[1a]

What little of its skin that can be seen beneath the discharge of innumerable sores is tinged with suppurate greens and vile browns. Pus weeps continuously from a Plaguebearer's single bloodshot eye and from its fore head protrudes a single horn-the mark of Nurgle's Rot. [1a]

Plaguebearers can cast spells of their diety. [4a]

It is said that those Plaguebearers that fail to keep their tally are punished by being transformed into Plague Toads. [3a]

Bands of Plaguebearers are the most organised and efficient of daemons upon the battlefield, shambling purposefully towards a chosen foe before hacking them apart with Plagueswords. Should a foe endure long enough to strike back, his blows will have little effect on the Plagubearers, for their corrupted forms feel no pain and regenerate damage at a frighting rate. [1a]

Units of Plagebearers are surrounded by a constant drone. This thrumming sound is created by the hosts of plump black flies that attend the Plaguebearers, and by the endless counting as the Daemons attempt to calculate the ever changing requirements of their master. A multitude of Plaguebearers counting all at once produces a sound so sonorous and penetrating that it is enough to make a mortal feel distinctly unwell. It is all but impossible to tally something amid such chaos, through this in no way discourages the Plaguebearers from their efforts. They are the daemonic embodiment of the need of mortal creatures to impose meaning upon a meaningless and uncaring void.[1a]