From Warhammer - The Old World - Lexicanum
(Redirected from Highborn)
Jump to: navigation, search 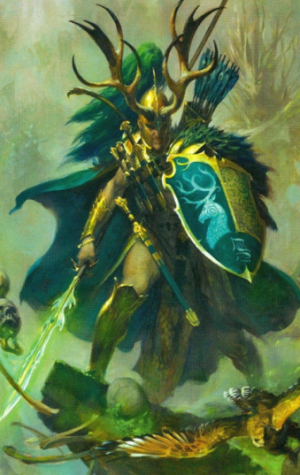 Glade Lords also known as Highborns are the lords and ladies of Athel Loren, whom have ruled the Wood Elves for millennia. Each Highborn is required to keep his domain free from intruders and has the ultimate responsibility over the area of the forest in which his followers dwell. Most often, this is a task that is accomplished by the Highborn's Eternal Guard and Glade Guard, though in more dangerous times, he or she will entreat the spirits of the forest, or even Elves from other regions of Athel Loren, to lend aid. Though the inhabitants of Athel Loren are as proud as any of the Elven races, they never allow their own hubris to endanger their home land. The defence of Athel Loren is the one calling that is held above all others.[1]

Should a Highborn fail in his responsibility to the forest, it is not unheard of for him to cede his position. Leaving his great hall, he departs the safe paths of the forest and travels to where the dark pathways twist in upon themselves and malicious spirits dart between the trees. There, the noble seeks atonement and forgiveness from the spirit of Athel Loren. Some are not seen again save in dreams and memories. Others return, within a few hours of their departure, unnaturally aged, as though many decades had passed. A very few return after many years, reinvigorated and filled with purpose by their communion with the forest.[1]

Unlike the Elves of Ulthuan, and indeed much of the known world, the Wood Elves make no distinction between male and female when it comes to rank and duty, whether those responsibilities find their calling in war or peace. In the noble houses of Athel Loren, the daughter is as likely to inherit the family title and rank as the son. Even so, not all Highborn are equal. Each of the twelve realms of Athel Loren is ruled by a lord or lady of impeccable standing. Answerable to each of these are countless sons and daughters of noble houses ever seeking to improve their own situation. Though Wood Elves commonly inherit rank according to the station of their birth, it is not unknown for a particularly valorous individual to be elevated to higher authority.[1]

When Athel Loren goes to war, the nobles direct the efforts of its armies, often commanding a varied yet lethal assortment of Elves and forest spirits. In the summer months, when the forest is strong enough to defend itself against most threats, many are caught up in Orion's great hunt, Even so, there are always a handful of able war-leaders who remain within the borders of the wood, ready to defend their home to their dying breath.[1]

The culture of the hunt is strong in Athel Loren and finds its way onto the battlefield even during the times of Orion's slumber. It is traditional for the Wood Elves not to launch themselves into battle until their leader, or one of his captains, has loosed a shot at the heart of the enemy leader. This duty is allocated before the battle begins, and the firer is granted the honorary title of Talon of Kurnous. Seldom does the Talon's arrow kill the target, but such is not the intent. Rather it is a reminder of mortality for the foe, and a final entreaty to the Hunter God for his blessings in the battle to come.[1]