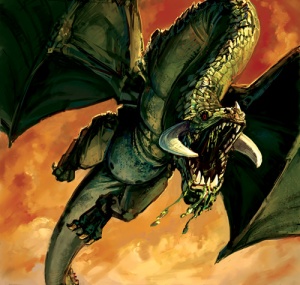 Wyverns are cannibalistic predators that are known to be a distant off-shoot of the Dragon race but Dragons look down them as the lesser creatures that they are. [3a]

These creatures have been known to be oppurtunistic hunters, able to eat just about anything from rotting carcasses to bloated bodies amongst other filthy habits, making the Wyvern one of the most foul-smelling creatures to ever plague the Worlds Edge Mountains. These creatures have been known to swoop down from their bone-filled lairs high up in the mountains to devastate Empire towns and farms for easy prey. When the Men of the Empire see a Wyvern in the distance, they often go into a panic. For the Greenskins, its the complete opposite.[1][2]

When they see these creatures circling above, Orcs have been known to greet it with raucous cheers, for the flying creature represents both might and brutality, traits that are highly respected within Orc society. Perhaps the only way for an Orc to ride a Wyvern is to steal a Wyverm egg and hand-rear it to maturity. These beast are the most highly prized mounts within a Greenskin army, where only the most powerful Orc Warbosses or Great Shamans have the ability and unnatural bond to bind these cruel beast to his will. In battle, Wyverns are voracious beast that always hunger for fresh meat, and would sometimes land right in the middle of an enemy unit and feast upon their flesh in the droves while its rider hacks at the enemy that are still left.[1][2]

They are found lairing in dank caves across the Old World, Cathay and Naggaroth. Although they care little about territory, they have terrible eyesight and often attack much stronger creatures than they should. [3a]