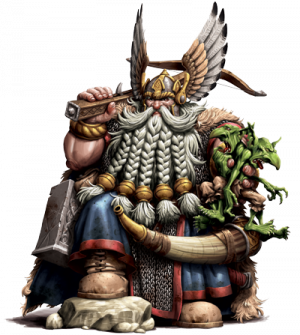 King Kazador is the legendary Dwarf King of Karak Azul, a magnificent and ancient Dwarf Hold that is situated within the southern lands of the Worlds Edge Mountains. [1a][1b]

He is a massive Dwarf, and incredibly strong even by the extraordinary standards of Dwarf kings. He is said to have once lifted a fully-laden ore pony which had stumbled and become trapped in a crevasse. [1b]

Kazador's Queen is Morga who is now a captive in Black Crag and his son is Kazrik. [1a]

In his younger days he would cheerfully repeat the performance when challenged. It is said that he could (and frequently did) out drink all the Dwarfs in his kingdom. His younger days were full of feasting and fighting, bawdy songs and raucous humour, and, of course, battles. Lots of battles, so much so that eventually the Greenskin tribes have all but avoided the territory of King Kazador whenever they possibly can due to his legendary reputation as a skilled general and warrior. [1a]

Ruling over a kingdom surrounded by Greenskins gave Kazador few worries. In fact he found it rather convenient, and spent the summer months hunting Goblins living within the mountains whenever he can. Sadly those days are long gone. Today nothing gives King Kazador joy. He no longer has any appetite and food always displeases him. Ale is always weak and is unable to lift his spirits. He no longer hunts Goblins in the mountains or bellows with laughter at some casual jest. [1a]

Today he sits in the darkness of Karak Azul and broods. His subjects trace his decline when a raiding party of Greenskins lead by a massive Orc by the name of Gorfang Rotgut infiltrated the stronghold, pillaging and looting all in his wake. Although the Orcs were eventually driven out, they took many captives, including many of Kazador's own kin. Even today Kazador knows that his own people are rotting in the dungeons of Black Crag, and so far he has been unable to recover them or to avenge their deaths (if dead they be). Prince Kazrik, the king's only son, suffered a fate far worse. Captured along with his Queen and other kin folk in the king's own throne room, the young Dwarf Prince was not taken captive but shaved and nailed firmly to Kazador's throne as a gesture of contempt. [1a]

Since then, the King has promised half his treasure hoard to the Dwarf who brings his kinsfolk back alive; a quarter of it to anyone who brings their dead bodies back to rest in Karak Azul. To anyone who kills Gorfang he has promised the pick of his treasures. Since Kazador is wealthy as only a Dwarf king can be, this offer has caused a lot of excitement in the Dwarf realms. The only thing that lightens Lord Kazador's gloom is being able to settle old scores and to this end he has led armies all over the Worlds Edge Mountains. He has become a dark and brooding avenger, a pursuer of his people's enemies, and callous destroyer of evil wherever he finds it. As he leads his armies into battle, he sounds the great Thunderhorn to proclaim that King Kazador has come to take his vengeance once more. Perhaps he hopes that one day he will meet Gorfang in battle, so that at last he can avenge himself of his enemy and lift the burden of responsibility that lies upon his heart. [1a]