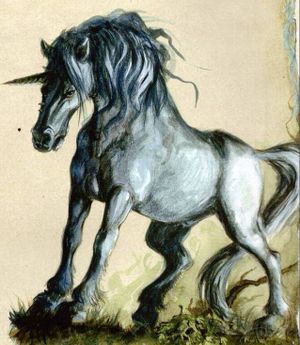 Unicorns are renowned for their elegance and grace, which makes them look peaceful. However, they are arrogant and as such unpredictable creatures, who do not mind using their cream hooves to molest a person to death and they are likely to enjoy skewering creatures on their single horn simply to show its power. Unlike horses, they are solitary creatures.[2]

Although they have gained a reputation as a noble beast, they are actually subborn, selfish, tempermental and vain. [3a]

A Storm of Magic is a rare occasion when enough power is gathered to allow Warhammer armies to harness its power for combat, often bonding several of them into a small but powerful unit to distract enemy troops from the main army.[2]

Rarely they may allow females to ride them into battle [1a] as they have an afinity to both females and wizards. [5a]

They shimmer with power, being blessed with a glamour that can beguile those who come close to them. This glow also provides physical protection from both mundane attacks and hostile magic and its very presence can harm summoned or undead creatures.[3a]

Many Bretonnian knights have been killed seeking univorn ivory as they pursue them into Athel Loren, often overwhlemed by Forest Spirits or Elf arrows. [5a]

When they die, male unicorns rapidly decompose - rotting to near nothing in minutes and leaving no trophy for hunters. It is said that drinking the blood of a freshly slain unicorn gives the drinker great potency. [4a]

Unicorns are virtually immune to hostile magic and can extend this to help protect a rider. Daemons, Elementals and other magical creaures can be banished or made unstable by the mere presence of a unicorn and its attacks are fully effective against creatures immune to non-magical weapons. [1a]