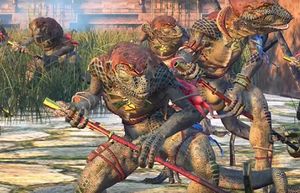 Chameleon Skinks are a subspecies of Skink distinguished by a number of characteristic peculiarities. [1a]

They are more aggressive than other Skinks, and their role centres on scouting, infiltration, concealment and hunting. They are great hunters, capable of following prey or an intruder for yards without it even noticing. This is made possible by their ability to change their skin colour and texture in a heartbeat, allowing them to perfectly blend in to their environment.[1a]

Unlike most Skinks, the Chameleon Skinks do not dwell in the cities but rather make their home in the jungles - some roaming whilst others claiming and guarding a home territory. When war or invaders threaten, they put themselves at the disposal of the Skink Chiefs acting as scouts and assassins. [2a]

Chameleon Skinks have large, protruding eyes that can move independently, allowing them to see all around them while remaining perfectly motionless. Indeed, they have been known to stay unmoving for hours on end, awaiting the perfect moment to launch an ambush.[1a]

They are an unusual spawning that, in more recent years, has returned to the world after almost becoming little more than a memory. Being originally bred only in the sacred Spawning Pools of the pyramid-city of Pahuax, the breed almost died out after the city was destroyed soon after the fall of the polar gates. In recent years, Chameleon Skinks have started to spawn in several of the spawning pools across Lustria and the Southlands.[1a]

Their return has been interpreted by Skink prophets as a part of the Old Ones' Great Plan. Some claim that this is due to the Chaos threat growing, or because the Old Ones saw that the Lizardmen race needs to expand its borders. Either way, the return of the Chameleon Skinks is a great sign for the Lizardmen.[1a]

A group of just seven Chameleon Skinks wiped out a horde of 5000 Savage Orcs who had marched on Itza Chiquita. [2a]