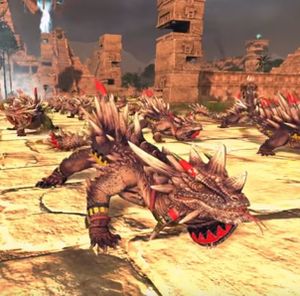 Razordons are large, predatory creatures that stalk the jungles of Lustria and the Southlands. They have thousands of spines on their backs and tails. They attack in a unique way, by activating powerful muscular spasms that launch the spines directly at the prey, and those who aren't killed immediately will quickly bleed to death. Their spines will grow back over time, so they do not need to worry about shooting too many at once.

Some Skink handlers are capable of goading these creatures to hunt down a prey animal, or an intruder. These Skinks are capable of activating the spikes of the Razordon at will by poking their backs with the pointy end of their spears. However, even without its spine attack, a Razordon is capable of tearing its enemies to pieces using its dagger-like claws and razor-sharp fangs.