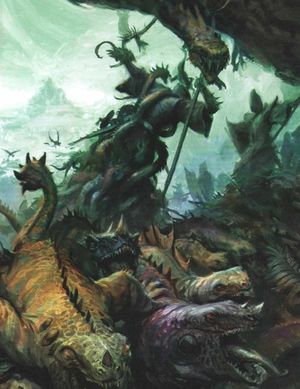 Jungle Swarms are masses of dangerous reptiles ranging from tiny poisonous lizards to huge pythons or other snakes. [1a]

In battle, Lizardmen armies are often proceeded by swarms of serpents and other reptiles, even on ocassion being drawn out of the sacred snake pit of the temple of Sotek. [2a][3a] When they attack, they swarm around the legs and bodies of their prey, wrapping them in deadly coils or biting with venomous fangs. [1a]

They can be found in jungles in such places as Lustria and the Dragon Isles. [1a] Many of the cities and ruins are overun by such creatures and the snakes in particular are sacred to Sotek. [2a]

Notable creatures of the Swarm

There is a huge variety of creatures found in the jungles, even parasitic snakes that inject their young into the bloodstream of their prey. [3a]