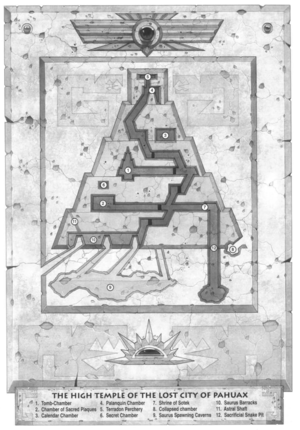 High Temple of the City

It has been lost and refounded six times although its pyramids remained intact each time. [4b]

It was created by the Fourth Spawning of Slann before the creation of the World Pond. [2a]

Following the collapse of the Warp Gates, the Mage-Priests are slain by a host of Greater Daemons. [2a]

During the Great Catastrophe Pahuax was aged thousands of years in a second after Lord Pocaxalan attempted a ritual which spiralled out of control. All of the inhabitants, and large areas of the city, were reduced to ash, although some pyramids survived - standing as a testament to power of the ancients.[1c]

High Elf seafarers led by Captain Beltharius [5a] reached the city and were defeated by Lord Huinitenuchli [2a] who had uttered a single sentence interpreted by the eldest Skink Priest present to mean They should not be here. [4a]

Pahuax was once the only place where Chameleon Skinks were spawned. Following the loss of the temple-city the sub-breed was considered to be extinct. However, when the Chameleon Skink Oxyotl returned from the Realm of Chaos in 2517 IC there was a unheralded spawning of Chameleon Skinks in the ruined temple-city. Since then there have been spawnings all over Lustria, although what this heralds for the Lizardmen is unknown.[1a][1d]