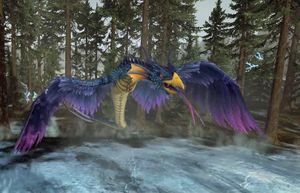 They are intelligent and are powerful Wizards. [3b]

Whilst they aid the Lizardmen in the defence of sacred sites, the dimunative copper skinned natives also hunt young Coatl who are viewed as choice delicacies, having becoem experts at hunting them down. Amazons are also often seen wearing Coatl feathers which it is assumed they gain from trade. [3b]

They can reach 20 feet in length, their body often feathered as well as their wings whilst their head resembles that of a Dragon. [1a][2a]

It is said that they can alter the jungle to draw away invaders from sacred sites. [2a] It often appears from the skies on a thundereous wind which stirs up the undergrowth and churning up the jungle canopy. Like the Slann, adults are protected by a Shield of the Old Ones. [3b]

They have the Master of the Sacred Spaces spell which allows them to control and use terrain against enemies. [3b]

They are associated with the god Quetzalcoatl [1a] but to the Lizardmen they are the messengers or perhaps even the Avatar of Tepok, the god of the air, magic and sacred places. Skink Priests seek their aid when such holy places are threatened by invaders. [2a][4a]