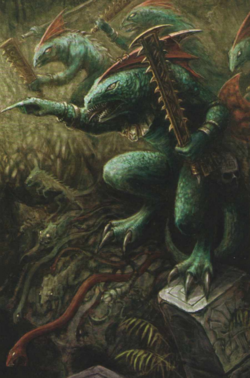 Skink Chiefs are the leaders of Skink society, second only in command to the Skink Priests. [1a]

In the Lizardmen chain of command, Skink Priests direct their orders to Skink Chiefs. These are Skinks who have been marked for greatness. While the Priests attend to prophecies, it is left to the Skink Chiefs to execute orders. It is they who typically oversee patrols, major construction projects and the messenger system. [1a]

They are aggressive and brave by Skink standards [2a], sometimes riding to battle atop Terradons. It is not their role to sacrifice themselves in battle, but rather to spy out intruders, alert the Saurus and then guide them towards the foe. It is they who interpret the complicated instructions — often passed from Slann Mage-Priest to Skink Priest and finally to themselves. Then, in turn, it is they who give orders to the Saurus and the cold-blooded behemoths that make up the bulk of the Lizardmen armies.[1a]