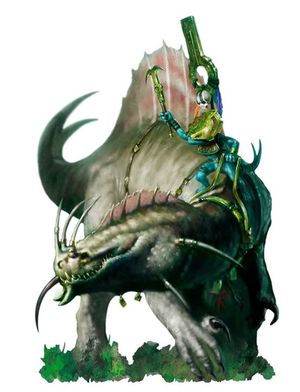 The Skinks of Lustria consider it a holy creature but also fear it – naming it the Pale Death as whilst the Carnosaur might be more ferocious, it is easier to avoid. The Troglodon, stalks its prey stealthly with victims or their companions only seeing pale scales flash by in the undergrowth. [1]

A Troglodon is nearly blind, using quill-like whiskers and tongue to sense prey which it then creeps closer until it is range for a final lunge, stretching out its long neck. Their hollow teeth are filled with venom, and should it taste blood, they becomes more ferocious still, biting and gulping down hunks of flesh. If it can not close the distance, it can spit its toxic bile outwards which can eat through armour or melt through the scales of a Stegadon and the sizzling burn of the venom emits a sound and distinct smell of burning flesh which allows the creature to strike with certainty. [1]

Troglodons prefers to circle larger creatures at range, using its venomous spittle to wear down them down before launching itself for the kill. [1]