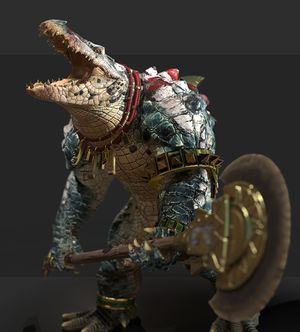 Kroxigor with its great weapon.

The Kroxigors are giant, crocodile-like creatures who tower above the rest of the Lizardmen. [1a]

A Kroxigor, standing upright, would easily be twice the height of a Saurus Warrior. Their bodies are almost all muscle and they have powerful jaws lined with rows of sharp teeth. They are naturally armoured with tough scales and a thick skull. The Kroxigors are also aquatic and can travel through the marshes and swamps of Lustria at a relentless pace.[1a] When not working or fighting they enjoy submerging themsleves in waterholes to relax but where they can also have a chance of gaining a meal. [3a]

Kroxigors were originally created as the Lizardmen's construction slaves. They were the ones who carried the huge blocks of the temple cities into place. However the Kroxigor were never meant to be the smartest of the Old Ones' creations, and so they need directions from their smaller kin. They follow instructions diligently so understand more than onlookers might think. [2a]

The Kroxigors are rarely spawned into the world. When they are they come in small numbers and from the same spawning pools as the Skinks. [3a]

Naturally gregarious, Kroxigor usually gang together, but can also be attracted to a swarm of Skinks and will benefit from the excitement of being in a mass with them. Their huge reach enables them to use their great bronze axes to swing over the scurrying skinks at their feet. [1a]

They are given weapons by the Skink artisans, but when not fighting these can be forgotten and discarded so they are often chained to them so that they are ready for the next battle. [3a]