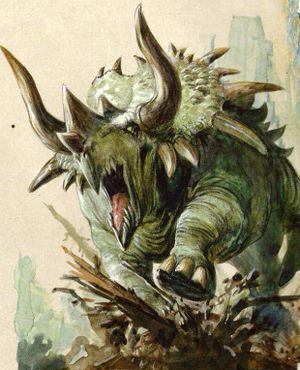 The Stegadons are among the most aggressive and the most powerful creatures to have ever rampaged it's way through the jungles of Lustria and the Southlands as well as the Dragon Isles. [1a]

They are ancient creatures that were living in the jungles of Lustria when the Old Ones first arrived. Gigantic, armored beasts, they feed on almost anything they come across, from the lush vegetation and the trunks of vast forest trees, to the flesh of any creature foolish enough to get in their way. They are strong enough to uproot entire trees, and they can crack stone with their heavy footfalls. [1a][2a]

In the heat of the jungle, the Stegadons cool themselves by wallowing in the swamps, relying on their thick scaly hide to protect them from crocodiles and the gigantic predatory fish that infest the waters. They care little for other creatures and fear nothing. [1a][3a] Only the vast bulk of a Thunder Lizard can cause them to alter course and a bull stegadon may even challenge such a mighty beast. [5a]

Most Stegadons live in large herds, but a few, mostly older bulls may leave them to establish territories of their own, challenging any that dares trespass. [5a]

They are considered more active and intelligent than Cold Ones, perhaps as they live out in the hot sunshine. [3a]

Although their temper has cooled as they aged, they are larger and strogner than others of their kind with thicker hides. Those in service to the Lizardmen are much venerated with gold and bronze plates fixed to their gnarled scales. Masks are set over the headcreast and metal tips added to the horns. [5a]

Since the time of Tehenhauin, the Ancient Stegadons have carried the Engines of the Gods into battle. [5a]

Massive horns project from the Stegadons' armored crests, and their bodies are covered in spikes and bony armor plating. Their tails are heavy and barbed, and can be swung with devastating force. These monsters are highly territorial and will charge and destroy anything that invades their territory. Disputes between rival male Stegadons can be heard for miles around, their roars reverberating through the jungle as the massive beasts fight. Often, these battles last for days on end, and are resolved only when one of the competitors has been slain, to be consumed by the victor.[1a][3a]

Stegadons serve a variety of purposes in the temple-cities of Lustria. Most are reared from their eggs by a dedicated crew of Skinks, and the Stegadon grows quite protective of its masters. They are commonly used for construction purposes alongside the Kroxigor as heavy lifters and draggers.[5a] The very largest Stegadon of all is named Zlaaq, and is the personal mount of Lord Mazdamundi.

Reared by teams of skinks, Stegadons can grow very protective of those skinks they have known since hatchlings. [5a]

However, they are frequently ridden into battle, and wear a huge howdah fitted with a variety of weapons, including a massive bow [3a] often known as the Sotek's Curse[5a] whilst older Stegadons use twin blowpipes. Most lethal of all are the arcane devices known as the Engine of the Gods, which are commanded by Skink Priests and allow the Priest to manipulate the Winds of Magic.[5a]