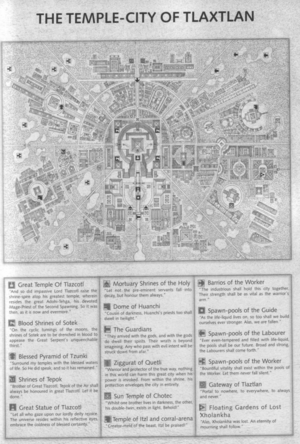 Tlaxtlan, is a Temple-City of the Lizardmen and known as the "City of the Moon" as was once renowned for its astromancers and prognosticators.[1a]

It was one of the second wave of temple-cities created by the Third Spawning along with Quetza and Zlatlan but after Itza, the First City. [2b]

Following the collapse of the Warp Gates the Mage-Priest Adohi-Tehga repels the Daemons attacking his city and is able to lend power to the web of power that links it to the other cities. [3a]

Following the expulsion of Clan Pestilens from Lustria in about 100 IC, a council of the High Slann is held in the city and Tenehuini proclaims the Prophecy of Sotek. [2b]

They observed the moon and the stars in order to make accurate predictions of future events. However with the Great Catastrophe and the appearance of the second moon in the skies above Tlaxtlan their powers waned, as the moon is comprised of pure Chaos and did not obey the laws of the universe, which governed the original moons orbit.[1a]

Since the time of the Great Catastrophe the Slann of Tlaxtlan have focused their efforts into moving the Chaos Moon from its orbit, and thus returning their power. However more pressing concerns face the Lizardmen and the Chaos Moon, for now, remains. [1a]

An Elf expedition led by the explorer Sirion raided the city, stealing golden plaques before they were overwhelmed by Saurus Warriors. They flee the city and Lord Xiliquncani orders that the survivors be let go, noting that Sirion had looked into the Well of Time and seen the doom of the elves. [2a]