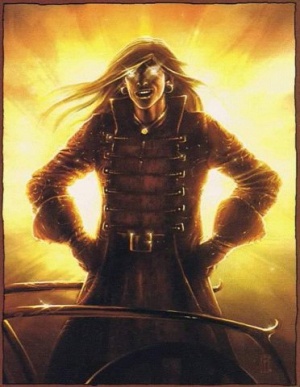 He is mainly worshipped in Kislev. It is said that Dazh took the secret of fire from the sun and gave it to the tribesmen. Without fire, the long winters would be deadly and tributes and prayers are often held up to him. In the south, he rules over the hearths of homes and is the god of guests and the needy. [1a]

Dazh is portrayed as a handsome youth with long flowing hair and wreathed in fire. He is said to live in a palace to the east (land of the Gospodars) and rests there each night after travelling the world during the day (the sun). He is accompanied by the Arari, warrior consorts who are seen dancing and fighting in the sky for his amusement.[1a]

The sun, or flame, are most commonly and gold is a sacred metal. Higher ranking priests will wear increasingly more gold and jewellery.[1a]

The temples are large, open arenas, so the people can offer to the god in the presence of the sky, where he lives. All contain braziers and firepits which send out scented smoke and can never be allowed to go out. Some even contain giant statues made of gold.[1a]

They are friendly with most other religions although there is distrust with Ulric as he is god of winter.[1a]

Every day is holy to Dazh. A daily welcome must be made at sunrise and he must be wished well when the sun sets. The summer solstice is the most important day as he walks among the people for the longest on this day. In the north, beasts are sacrificed and chants are performed to the gods, while in the south, ox are burned upon a fire of parchments on which the prayers of many people are written.[1a]