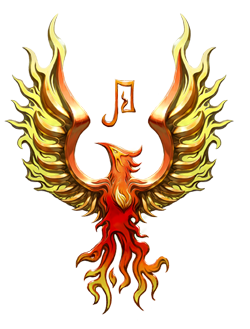 The symbol of the Phoenix, accompanied by the rune Asur which, in Tar-Eltharin, refers to Asuryan and the High Elves.

Asuryan, the Creator is the greatest and oldest of all the Elf gods. He is lord of the Cadai, the Gods of the heavens.

According to the High Elves he has been shaping their destiny according to his plan since the dawn of time. When a quarrel breaks out or there is a disagreement between the gods in heaven, his is the final say and the other gods submit to his judgement. From his diamond throne Asuryan observes the world, draped in a cloak of lustrous white feathers, bearing a sceptre and wearing a mask which is half white and half black. Asuryan can take the form of a Phoenix or a Great Eagle when he chooses, and he is sometimes known as the Phoenix King to many High Elves, despite the ruler of Ulthuan sharing the same name.

The most common of Asuryan's symbols is a stylised pyramid with a phoenix in the centre spreading its huge wings. At the tip of the pyramid is portrayed the eternal flame as a sun shining rays of light. The chief temple to Asuryan is the Shrine of Asuryan on the Isle of Flame in the Inner Sea north of Lothern. It is here that the new Phoenix King is tested before being crowned by passing through the ever-burning flame at the heart of the shrine.