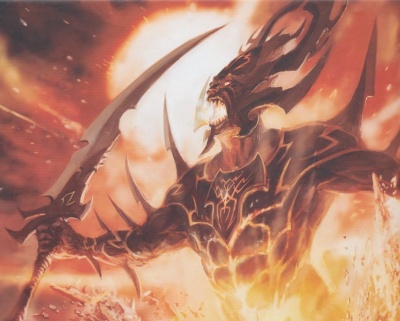 Khaela Mensha Khaine, The Bloody Handed, also known as The Lord of Murder is the Elven God of warfare and bloodshed. He is venerated most highly by the Druchii (Dark Elves).

High Elves venerate Khaine as their war god, and though they respect his power they are also mindful that the sword of Khaine cuts both ways. It was the Sword of Khaine, the personification of bloodshed and violence, that drove Aenarion, first Phoenix King of the High Elves mad after he drew it and used it to defeat Daemons that were invading Ulthuan.

Khaine is openly worshipped by the Dark Elves not as a god of war, but as a god of murder. This suits the harsh society of the Dark Elves, who view any sign of weakness as a fatal flaw. Holidays dedicated to Khaine invariably involve killing, such as the Harvest of Souls and Death Night. Fuelled by the social darwinism of Dark Elf culture, devotees of Khaine elevate killing to an art form and will gladly kill anyone - friend or foe - who displays vulnerability. The Cult of Khaine is the most powerful religion in Naggaroth. The great temple of Khaine is located in the city of Har Ganeth. It is a seat of great power, as the worship of Khaine is by far the most popular and powerful religion in Naggaroth. Hellebron is his high priestess but her authority is challenged by Morathi.

The Disciples of Khaine were members of a small and elite cult dedicated to the God of Murder.