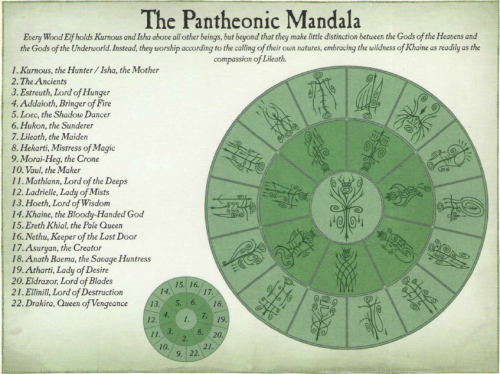 The Pantheonic Mandala of the Wood Elves.

All the nations of the Elves (High Elves, Dark Elves and Wood Elves) share a common belief in the Gods and Goddesses of the Elven pantheon. However the different kindreds of Elves place emphasise worship of different deities. They may also have subtly different beliefs about each God or Goddess.

The Elven Gods are separated into two groups. The first are the Cadai, who rule the heavens[1a]. The Cadai tend to represent productive and fundamental aspects of Elven society such as crafting and smithing, motherhood, farming or hunting. The Cadai are openly worshipped and revered by the High Elves and by the Wood Elves, with large temples and shrines as well as clergy and devotees who publicly profess their faith. The High Elves seem to revere Asuryan, The Creator most highly, while the Wood Elves assign equally high reverence to Kurnous, the Hunter and Isha, The Mother. The Dark Elves seem to mostly ignore the Cadai.

The second group are the Cytharai who rule Mirai (the elven underworld)[1a]. The High Elves and Wood Elves attempt to appease some of the Cytharai, whilst shunning others. In Ulthuan, small shrines exist and some individuals worship Cytharai privately (depending on the deity in question, this ranges from frowned upon to totally outlawed). However, no formal priesthoods openly worship the underworld gods in Ulthuan or Athel Loren. On the other hand, the Dark Elves openly and proudly worship the Cytharai, primarily Khaine, the Bloody-Handed God.

Mathlann is worshipped by elf mariners from all societies, and Morai-Heg the Crone occupies a unique position between the Cadai and Cytharai.

According to Elven legend, some of these deities are said to walk the mortal world, although sources differ about which ones. Although certainly Ariel and Orion are the living avatars of Isha and Kurnous respectively.

The deities of the Elves are represented by a circular rune pattern called the Pantheonic Mandala. The rune of the most important deity is placed in the center, while the others spiral outwards in order of decreasing importance. Naturally as the various kindreds of Elves use different script, and disagree on the importance of various deities, the Pantheonic Mandala is different for each nation. [7a]

Mirai, the Elven underworld, sometimes called the Black Pit, is a dark realm ruled by Ereth Khial the Pale Queen. The door to Mirai (referred to as the Last Door) is guarded by Nethu, who prevents wayward souls from escaping and the living from entering and stealing the secrets of the dead. It is here that Ereth Khial amasses her slave army made from the souls of dead Elves, preparing for Rhana Dhandra.

Rhana Dandra is the elven legend of apocalypse. It is then that all the Gods will have a final battle and Ereth Khial's army made from the souls of dead Elves will be pitted against Asuryan creations, possibly eating all of the living. In addition the Elven Gods will finally battle the Chaos Gods for the fate of the world, be the outcome good or ill..

However most Elven souls do not find their way to Mirai. Since the Coming of Chaos, Slaanesh the Dark Prince has claimed the souls of the Elven race. Slaanesh desires Elven souls above any others, and will hungrily devour any he can find. Of all the dead Elves throughout history, by far the largest portion have had their souls consumed by 'She Who Thirsts', as the Elves refer to Slaanesh. The prospect of this horrible fate terrifies the Elves.

In order to avoid falling into the clutches of the Dark Prince, High Elves bind their souls in waystones. Thus, even after death their souls will empower the magical wards protecting Ulthuan. Many High Elves wear stone necklaces to capture their souls even if they die far from Ulthuan. Wood Elves bind their souls into elemental creatures and trees, becoming a living part of the forest even during death and cheating Slaanesh of his meal. The Dark Elves are perfectly capable of devising a similar solution, but instead they shun the idea of living such a half-life. The knowledge that they have nothing but oblivion waiting for them only makes Dark Elves live with more wild abandon, and in any case for a Dark Elf to plan to die would be viewed as a fatal weakness.

Doomfire Warlocks are a special case: cursed with hollowness by Malekith, their souls teeter between the mortal world and the Realm of Chaos. Every day they feel voracious Slaanesh tighten his grip upon them. Other Elves fear Slaanesh's appetite as a possibility, but for Doomfire Warlocks it is guaranteed unless they sacrifice others in their stead, which they do most happily.

Not all unprotected souls are doomed to be consumed by the Dark Prince, though. On occasion, the trickster God Loec will rescue souls by playing Slaanesh in games of chance, and then cheating to win. This does not happen often, but even a small chance gives the Elves some glimmer of hope. In addition Ereth Khial will eagerly send her winged servants to abduct souls from the grasp of Slaanesh. However this must be done quickly and when the Dark Prince's attention is elsewhere, as Slaanesh does not suffer anyone to steal scraps from his table. Even those who are rescued cannot hope for any sort of paradise, for their souls face an eternity as slaves in Ereth Khial's army. Some Elves will worship Ereth Khial for this reason, hoping to earn her favour and avoid She Who Thirsts, although it is frowned upon by the High Elves.

Some Elves turn to the worship of Slaanesh out of a desire to appease him and hopefully spare their souls. In addition, Elves experience emotions more strongly than other races and the Slaaneshi emphasis on excess may appeal to this aspect of their personalities. The worship of Slaanesh is forbidden by the High Elves and assuredly also by the Wood Elves. The penalty for this crime is death. Hidden within High Elf society some Slaaneshi cults exist which are persecuted and hunted down by the Sword Masters.

The cult of Slaanesh is also forbidden by the Dark Elves {{Fn|Warhammer Armies: Dark Elves (6th Edition) p. 73</ref> and Hellebron seems intent upon the persecution and destruction of all Slaaneshi cults and the execution of all cultists. Nevertheless several Slaaneshi cults remain hidden within Dark Elf society, and Malekith and his mother Morathi seem to unofficially tolerate its followers using them as infiltrators and hidden agents in the eternal struggle against the High Elves.

The division between the Cadai and Cytharai is a fairly new convention, only appearing in Warhammer Armies: Dark Elves (7th Edition). The given description results in the unclear position of Moraig-Heg.