From Warhammer - The Old World - Lexicanum
(Redirected from Juggernauts of Khorne)
Jump to: navigation, search 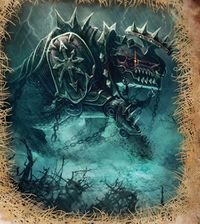 A Juggernaut of Khorne

Juggernauts (also known as the Feet of Khorne, Blights of Khorne or Juggers) are the steeds of Khorne.

They are massive Daemons of Chaos cloaked in sheets of steel and brass instead of flesh. Half-daemon, half-enchanted steel and sinew they stand taller than a man with blood of liquid fire. Their sinews are steel cables, their limbs powered by great pistons and gears and as they move and trample enemies they belch smoke and fire. [1a]

Juggernauts are ridden into battle by powerful mortal and daemonic minions of Khorne, for only those possessed of exceptional willpower can hope to control such a raging beast. They are also creatures that pull the Chariots of Khorne into battle. Juggernauts, simply put, are pure killing machines with little intelligence, just the raw instinct of combat.

Among the mortal Warriors of Chaos, the most favoured Chaos Knights who dedicate thousands of killings to Khorne become Skullcrushers, riding terrifying Juggernauts into battle.[2b]

Meanwhile, marching from the Realm of Chaos are the immortal Bloodcrushers, a Bloodletter daemon riding a Juggernaut, and wielding a hellblade.[2a]