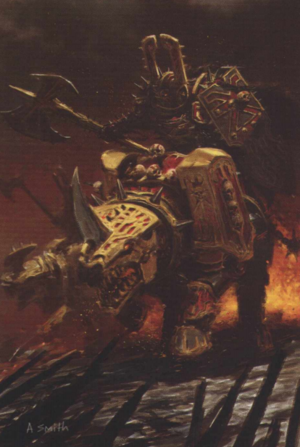 The Skullcrushers of Khorne are one of the most devout warriors dedicated to Khorne, the Blood God's worship, and whose legendary skills in arms and warfare has earned them the right to ride the fearsome Juggernaut into battle. Skullcrushers are unsubtle warriors who revel in battle and live only for the shedding of blood in the name of Khorne. Only those Chaos Knights who devote themselves utterly to the Lord of Slaughter and offer to him a mountain of skulls are destined to become Skullcrushers. Anyone or anything foolish enough to stand before them is destined only for a short and brutally violent fate, for Skullcrushers are completely without mercy and leave only a trail of broken bodies and a river of spilt gore in their wake.

So favoured in the eyes of Khorne are these murderous Chaos Knights that the Blood God has gifted them with Juggernauts to carry them to war. These massive daemonic mounts are made of living metal and pure rage; they are dealers of untold destruction who grind their foes beneath steel sinews and brass hooves. As formidable as a normal Chaos Knight is, when mounted upon a Juggernaut, he is nigh unstoppable. As the blood-crazed knights bellow their battle cries, their fearsome mounts snort steam and paw out divots the size of shallow graves before stampeding towards the ranks of their enemy and flattening anything in their way. The knights themselves are no less brutal, hacking their opponents apart with axes and cleavers, or else running them through with jagged lances. Mightiest of all their number is the Skullhunter, he who has spilt the most blood in Khorne’s name and who has gifted his dark patron with the skulls of mighty kings and great heroes.

Skullcrushers can be seen roaming the Realm of Chaos and the lands of the north, butchering all who cross their path. Such is their need to kill that Skullcrushers will charge the moment a foe is sighted. Only the will of a truly mighty Chaos Lord can hope to quell their thirst for battle with the promise of an even greater and more bountiful battlefield in return for their service. Ultimately, it is the knights’ own rage that will be their downfall, for it blinds them to mortal dangers and reason. Eventually, Skullcrushers will challenge a monster that dwarfs even their massive stature, or pile into a foe whose numbers are simply too overwhelming. Outnumber or outmatched, their bodies will be torn asunder into grisly pieces by their vengeful foes. However, the Skullcrushers see even their own deaths as a victory of sorts, for Khorne cares not whose blood is spilt, so long as it flows.